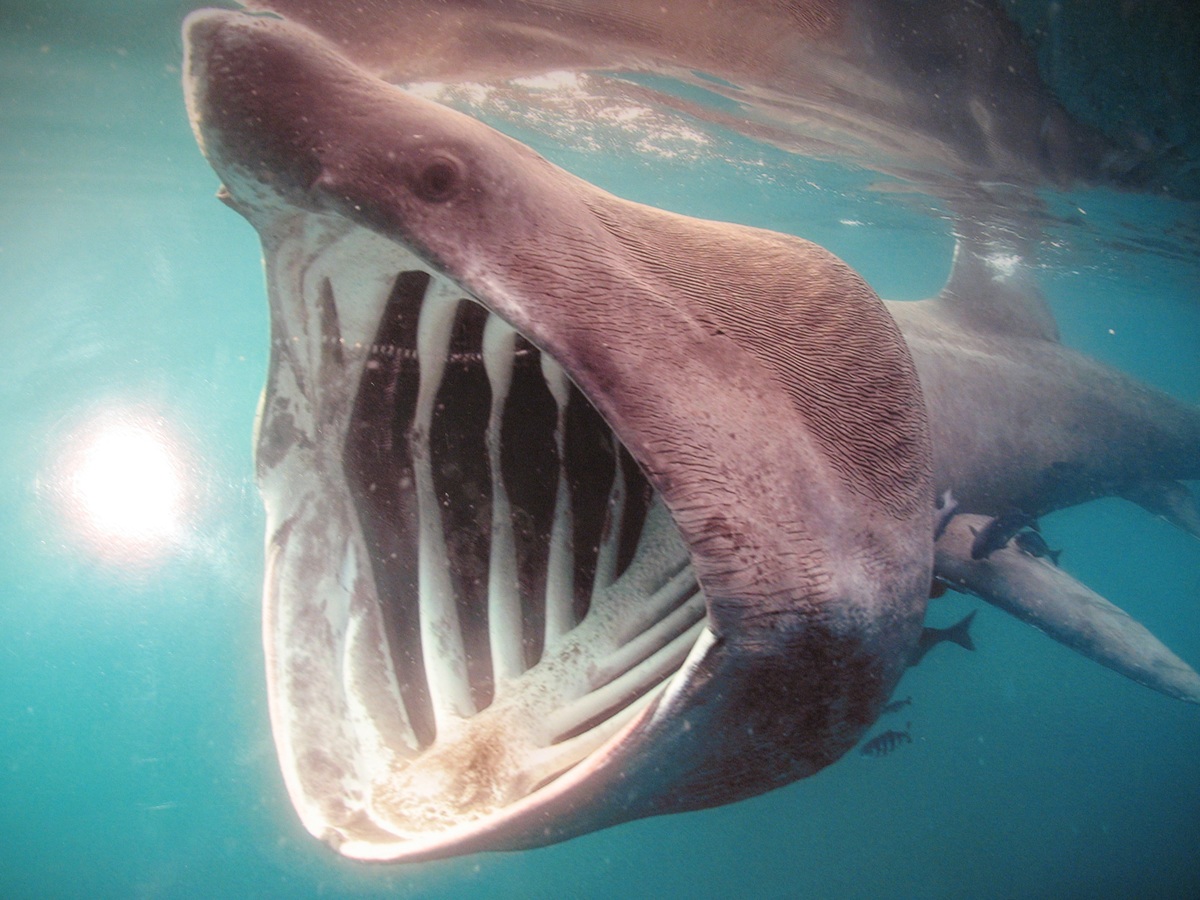 The basking shark is the second largest fish in the world and the largest that can be found in UK waters. Yet, despite its size, it presents no threat to humans as it feeds only on tiny animal plankton.

In the UK, the basking shark has been recorded mainly in surface waters from April to September, when it is usually immature females that are seen. The shark is thought to be migratory with seasonal population movements inshore to feed on high levels of plankton near ‘tidal fronts’ in coastal areas. They are then thought to disperse offshore to the north-east Atlantic.

The winter distribution and the location of pregnant females throughout the year remains unknown, but is believed that they move to deep water. There has been considerable variation in the numbers of sightings reported this century and in numbers taken by north-east Atlantic fisheries, indicating long-term, perhaps cyclical, changes in summer distribution patterns.

The life cycle of the basking shark is poorly understood. The only litter ever recorded in UK waters was of six young measuring from 1.5 to 1.7 m long, which is larger than any other known shark. Estimates of the development of the sharks suggest that males reach maturity at 12 years old, growing to up to 5.6m in length, whilst females normally grow to 8-10m at around 20 years of age. The gestation period for the sharks is thought to be 1-3 years, but how long they live is unknown.

Although widely distributed in both hemispheres, basking sharks are most regularly recorded in coastal areas of the UK where tidal fronts produce high levels of zooplankton, such as off the west coast of Scotland and the central Irish Sea area.

Relatively large numbers of sharks are seen feeding, or ‘basking’, in shallow waters during the summer months. It has often been assumed that the absence of such surface sightings means no sharks are present, but it may be that they are feeding in deeper water.

Although sightings have regularly been made in UK and Irish territorial waters, no reliable population estimates are available because it is difficult to relate surface sightings to actual population size.

Habitat constraints and food availability are likely to be important factors regulating distribution and population size.

One of the main threats to the basking shark is our lack of knowledge about the species – where they go in winter, and their courtship and breeding behaviour etc.

Accidental capture in fishing nets is a potential threat to shark populations, although few are now caught commercially. Liver oil was traditionally the main product derived from basking sharks, but market prices are currently very low. Shark fins are still a valuable commodity in the Far East, as are meat and cartilage.

In Great Britain, the basking shark is protected under Schedule 5 of the Wildlife and Countryside Act 1981, which makes the deliberate killing of basking sharks an offence.

Ratification of the Barcelona Convention and removal of the EU reservation on the Bern Convention could improve the status of the population visiting UK waters, if the Mediterranean and Atlantic populations are not separate.

The basking shark is listed as Vulnerable IUCN Red List.

Listing the species on Appendix II of the Convention on the International Trade in Endangered Species of Flora and Fauna (CITES) to enable monitoring and management of fisheries and international trade.

Develop and implement a code of conduct to reduce levels of harassment, in collaboration with scientists engaged in research on this species.
Consider opportunities for the protection of the species within European waters through a listing on Appendix II of both the Bern Convention and the Bonn Convention.
Develop and publish a code of conduct regarding interactions with basking sharks to reduce levels of harassment.
Commission research into the life cycle of this poorly understood species.
Quantify and monitor population size, structure, dynamics and movement patterns and range of individuals occurring in UK waters.
Improve long-term studies to: assess scientifically the population trends; elucidate migration and over-wintering areas which may identify locations where basking sharks mate and the pregnant females reside; and minimise unnatural mortality in these areas. Genetic studies may help determine the degree of mixing between populations.

Through The Wildlife Trusts UK marine programme, the Ulster Wildlife Trust is undertaking a number of steps to help protect basking sharks and their marine environment.
This work includes supporting research and survey work around the UK, including around Northern Ireland, the training of volunteers in basking shark identification and photo-identification projects, and lobbying for greater protection for these animals.
The Trust’s education programme aims to raise awareness of the basking shark in order to help to ensure its protection.

Become involved in the basking shark sighting and recording schemes, and photo-identification schemes to help us learn more about these poorly understood animals.
Report any sightings to the Ulster Wildlife Trust, including providing a photograph were possible.
Write to your MP / MLA and the Minister for the Environment, asking for greater protection for basking sharks in Northern Ireland waters.
Contact your local MP / MLA and the Minister for the Environment requesting that the basking shark should be listed in Appendix II of the Convention on the International Trade in Endangered Species of Flora and Fauna (CITES)
Follow the code of conduct on how to behave when near basking sharks, to avoid disturbing or injuring them. For more details contact the Ulster Wildlife Trust.