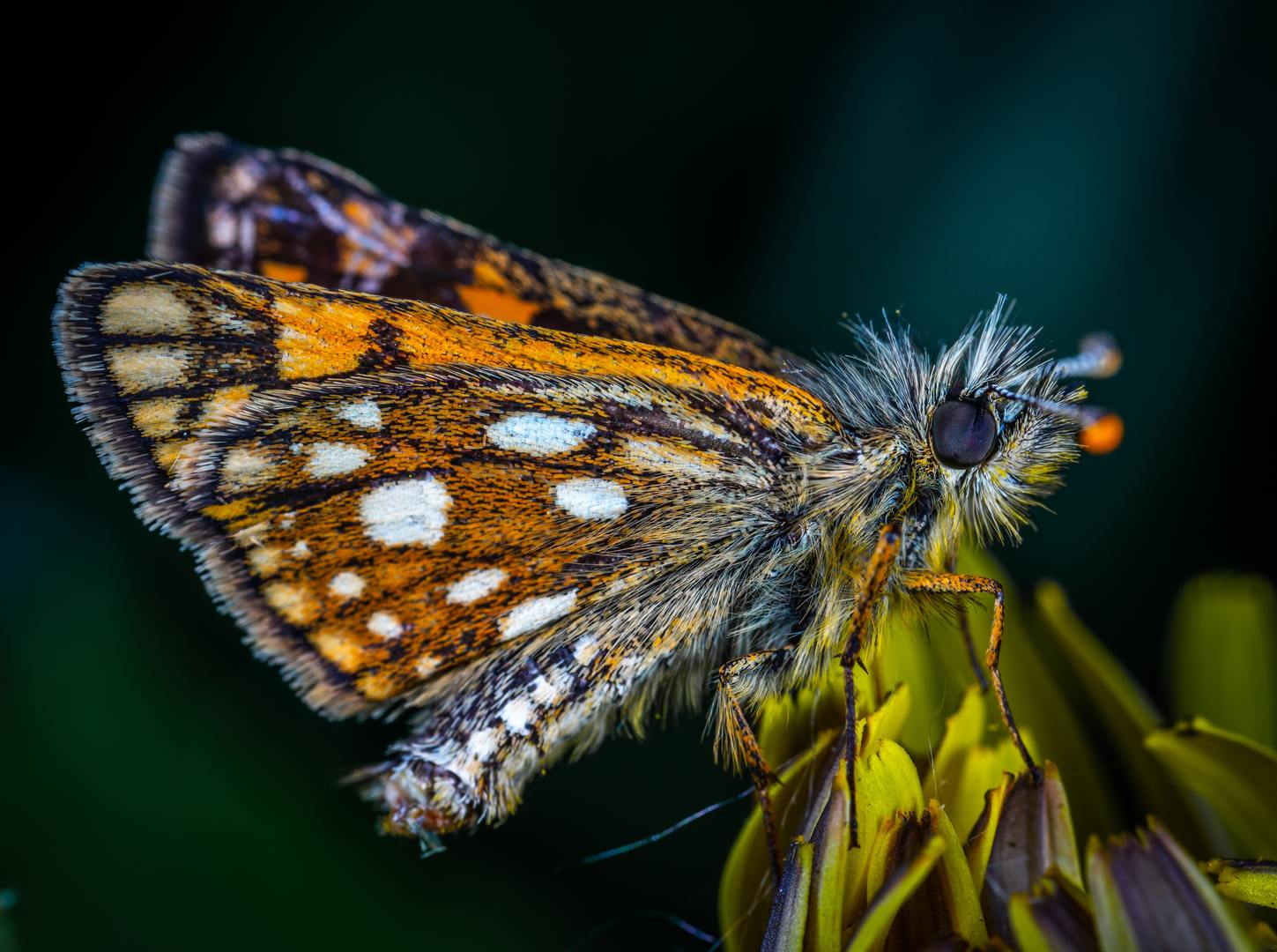 The marsh fritillary is a strikingly patterned, yellow, brown and orange butterfly. It is a medium-sized, rather weak-flying species on the wing in late May and June and overwintering in its larval (caterpillar) state.

In late summer, the small black caterpillars weave a communal web where they shelter and foray to eat leaves of the devil’s-bit scabious. In winter, they spin a tough web at the base of plants, emerging in the spring to feed again before pupating in May and emerging as adults in June.

The marsh fritillary is confined to discrete areas of flower-rich damp grassland in marshes, cot-over bogs and in sand-dune systems, and is dependant on the presence of devil’s-bit scabious (Succisa pratensis) as its main food-plant. Some dead grass or leaf litter is important for the caterpillars to bask on.

Despite its protection under domestic and European legislation, it is extinct in many European countries and it has joined the growing list of Northern Ireland’s endangered species. Until recently it could still be found in a scattering of locations through the south-east and middle of Northern Ireland, but there may now only be about ten principal sites remaining. Its decline has been attributed to a combination of factors such as drainage, agricultural reclamation, peat cutting, habitat neglect and progression to woodland.

The marsh fritillary has been identified by the UK Biodiversity group as a Priority Species. A Biodiversity Action Plan has been written which aims to protect and increase populations of this butterfly across the UK.

UWT Action for the Marsh Fritillary

It has been recorded at three Ulster Wildlife Trust nature reserves, at the Umbra, Slievenacloy and Inishargy Bog.
Inishargy Bog on the Ards peninsula holds one of Northern Ireland’s largest and most stable colonies, with almost 100 larval clusters recorded in 1999, reflected in a good year for adults at the site in the following year.

The Ulster Wildlife Trust has managed this reserve for the benefit of these insects for more than 15 years, and management has involved removing invasive scrub and controlling bracken control, and undertaking regular monitoring of the butterflies and larvae. However, the site continues to dry out due to agricultural drainage on adjacent land, leading to encroachment onto the bog by birch, willow, bramble, rush and bracken. The Trust is maintaining and expanding the conditions that create the ideal habitat for the marsh fritillary by excavating shallow scrapes down to the level of the water table, and clearing invasive vegetation from the margins of the better quality habitat. Subject to funding, the Trust will be seeking to acquire a further 5 ha of adjacent land which is rapidly losing its fritillaries due to lack of appropriate management.
The Ulster Wildlife Trust is committed to securing this vulnerable population of butterflies, and will continue to campaign for the preservation and management of similar sites throughout Northern Ireland.
Bogs are one of the Trust’s focal habitats and as such action taken by the Trust aims to protect and enhance this habitat to make a positive impact on insects such as the marsh fritillary.
The Trust encourages and advises landowners to manage their land for biodiversity through the Wildlife Areas Scheme. There are currently 77 Scheme members.
The Trust’s education programme aims to raise awareness of the marsh fritillary to help ensure its protection.

If you come across this butterfly, please help us record its local distribution by contacting the Trust to provide details on its exact location and the type of habitat where it was recorded. Please record an accurate description of the insect, preferably accompanied by a photograph.
Landowners with suitable habitat on their land should contact the Trust for advice on how to manage their land for the benefit of the marsh fritillary butterflies.
Volunteers can help at the regular marsh fritillary counts. Contact the Ulster Wildlife Trust for details.

For further details on these and other endangered or threatened species, visit the National Biodiversity Network web site, the Ulster Museum website or the Biodiversity Action Plan website.